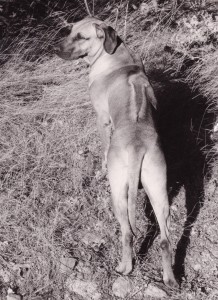 Duke was born December 11th, 1963, bred by Bengt Florén, honorary member of Swedish Ridgeback Club.
Duke died in cancer only 6,5 years old.
He was named Simba in his pedigree, but as he had the noble look of a duke, Olle persuaded the Swedish Kennel Club to change his pedigree name to Duke.

Duke was the first ridgeback being x-rayed in Sweden and found free of hip dysplasia. Elbows were not x-rayed at that time.
He sired totally 14 puppies (9 males and 5 bitches) out of two bitches:
Trefonen Baringo 1967 och 1968
Int Nord Ch Sari of Dudwell 1968

“First class puppy of much promise. Good head, dark Eye, sound legs and feet. Well defined ridge. I hope he grows a Little more at the shoulder, which he has time to do. A Little straight in stifle.”