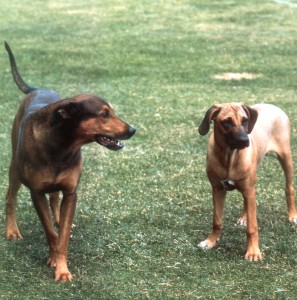 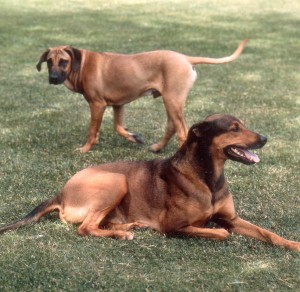 there was a fantastic dog named Bela! He lived with his master during the last part of the 50’s and during the 60’s outside Stockholm. Bela was not like any other dog, he was bred by a very famous TV-personality in Sweden. The fact that he was only a mongrel was not of any importance. Thanks to him Olle Rosenqvist started his search for the Dog – the Dog that should be just like Bela and maybe a little more.

Olle looked through the literature. Was he looking for one of the breeds in Bela? That is rottweiler or greyhound? Was it a dobermann?

For a long time Olle chose between Cheasapeake Bay Retriever and that African Liondog he had seen during his travels in Africa and also in National Geographic. When his old friend Bengt Florén, working for the air company SAS, was based in Kenya Olle asked him to take a closer look at the breed … Bengt imported a bitch to Sweden followed by a male.

That’s how it all started! And all thanks to Bela!